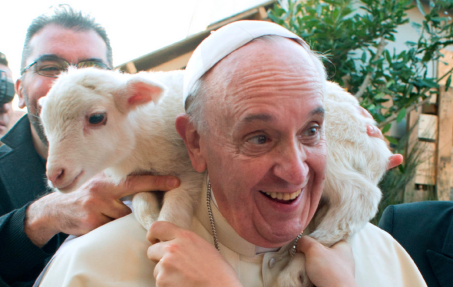 I am not talking about the warm fuzzies or the swooning that seems to follow him everywhere. There has been an awful lot of swooning. I’m not sure swooning over any pope is entirely healthy anyway. And I hope I am not inclined to illusions or delusions. I see him as a man with limitations and passions. I cannot say I agree with him on every little thing. And he and I certainly we will not share many opinions on any number of topics. But he is my Pope. And I love him.

Why do I write this? As someone who is gradually learning and appreciating the Traditional Latin Mass, I come across a lot of negative attitudes about Pope Francis. I find many of these attitudes on “traditional” Catholic websites and social media. Some would say the Holy Father is merely good at making a show of good works, but that there is no substance behind the show. Some would say he is unorthodox in his beliefs, which is to say not fully Catholic. Others condemn him for decisions he has made and signals he has sent. And even some say he is actually mean and manipulative, one daring to call him a dictator. Then, of course, there are the sedevacantists who don’t call him pope at all.

The thing is I get that. I see what others are seeing. I understand their arguments. I too am not always happy, and sometimes I am very troubled. I worry about the Pope’s agenda, and about some of those with whom he surrounds himself. I am convinced the Vatican is a hotbed of political maneuvering entirely unbecoming of churchmen. And I definitely have issues with what seems to be clear and strong (strong-armed some would say) movements in unhealthy directions regarding the Church’s teaching on marriage and sexuality, movements that seem encouraged by the Pope. Could the Pope be undermining the Church in some way? For how crazy this may sound, he just might be.

I am not uncritical.

But I also know or am convinced of several things:

If you are still reading, then I will say that I do worry somewhat about this pontificate. I love Pope Francis, but I think he may be doing a poor job at running the Church and the Holy See. I also worry he is under the sway of powerful theologians and thinkers and politicians who are pushing to further the modernist agenda begun before Vatican II, flowered in the 1970’s and 1980’s, and continues today. He himself may be a through and through modernist. And he might actually be a dictator — from what I’ve read this is likely. So I have concerns.

BUT… I cannot know his heart. I do not know how the Vatican works, or most everything that goes on behind the scenes. I recognize that almost no reporting about the Pope, pro or con or apparently neutral, is without some kind of agenda and is therefore skewed regardless of which “side” it comes from. I find myself, in my “mature age” becoming skeptical of absolutes, except when it comes to dogma. I want to trust in God, and I do. I refuse to get caught up in the speculations, at least not too much. And I certainly do not know what God is up to. So I pray for the Pope, the Church, my Archbishops and priests, my family, and the world.

Simply, I am pro-Pope. I am pro-Church. I don’t think it’s a good thing for Catholics to publicly criticize the Pope. If they want to in private, with the right people open to discussion, and with thoughtful Catholics who can and might challenge their complaints, then that’s fine. But they shouldn’t be too public about it, and they shouldn’t be in an echo chamber either. Satan is the real enemy. Don’t open cracks for him. And the world, because it loves Satan, is already the enemy of the Church too. No need to give it any more ammo.

YET… I am not terribly worried. In fact, I’m not really worried at all. I have come to believe at the core of my being that God is love, that He does work all things together for good for those who love Him, and that His providence is real. I also believe that suffering is good, and that deeply knowing this is one of the reasons I came into the Church — not so that I would suffer more, but that I would be in the Church that actually embraces suffering and understands it, incorporates it. It’s just too important to go anywhere else.

Finally: I know something about what it’s like to be a Christian without a Pope. I lived many decades as a Protestant. I cling to the Pope, at least to the office itself. I sense many Catholics don’t understand this — at least they don’t see with the kind of clarity I do. My desire is first to help the Pope, not to denigrate him, to lift him up, not to bring him down. Catholics need to see how truly important it is to have a pope. Today Francis is our Pope.

He is my Pope. 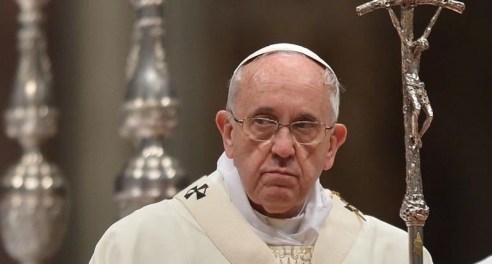